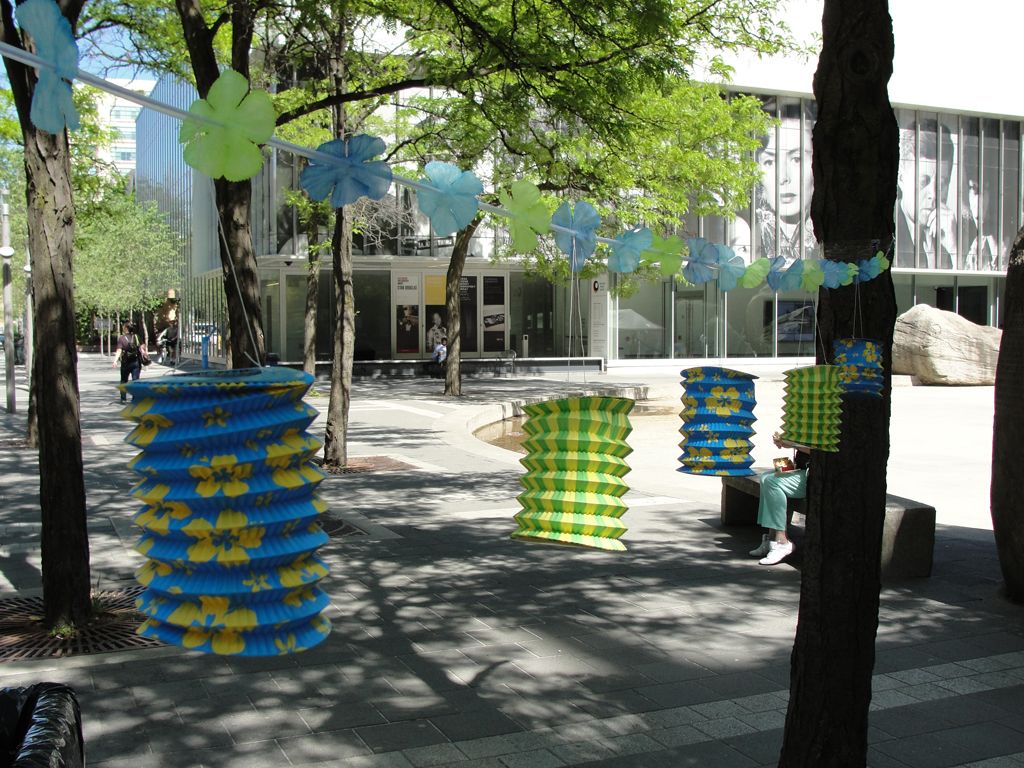 For the first time ever, Vancouver, Toronto and Halifax joined Montreal, Bogota, Copenhagen, Costa Rica, El Salvador, Cape Town, Rio de Janeiro, Brazil and Tijuana in a very cool citizen-driven festival, 100 in 1 Day, where, over the course of 1 day, each city’s residents participated in acts, aka interventions, to inspire and showcase ideas for a better city. The festival is the brainchild of a group of Danish design and business students studying in Bogota, Columbia, who believed that the best way to enact change in a city is to engage its citizens to show the elected officials what’s important to its residents. Here’s a great post in Canada’s 100 in 1 blog that talks more about the thinking behind the original festival in Bogota.

So on June 7, 2014, Toronto held 174 interventions across the city, from a Potluck in Wildwood Park in the east, to a Community Tree Planting in Mississauga in the west, to a Net Zero Passive House Tour in the north, and many more in between. With this being our first year participating, I can’t wait to see how this festival grows and evolves in Toronto over the coming years!

Here are just a few of the interventions downtown that my friends and I managed to see in this year’s event: 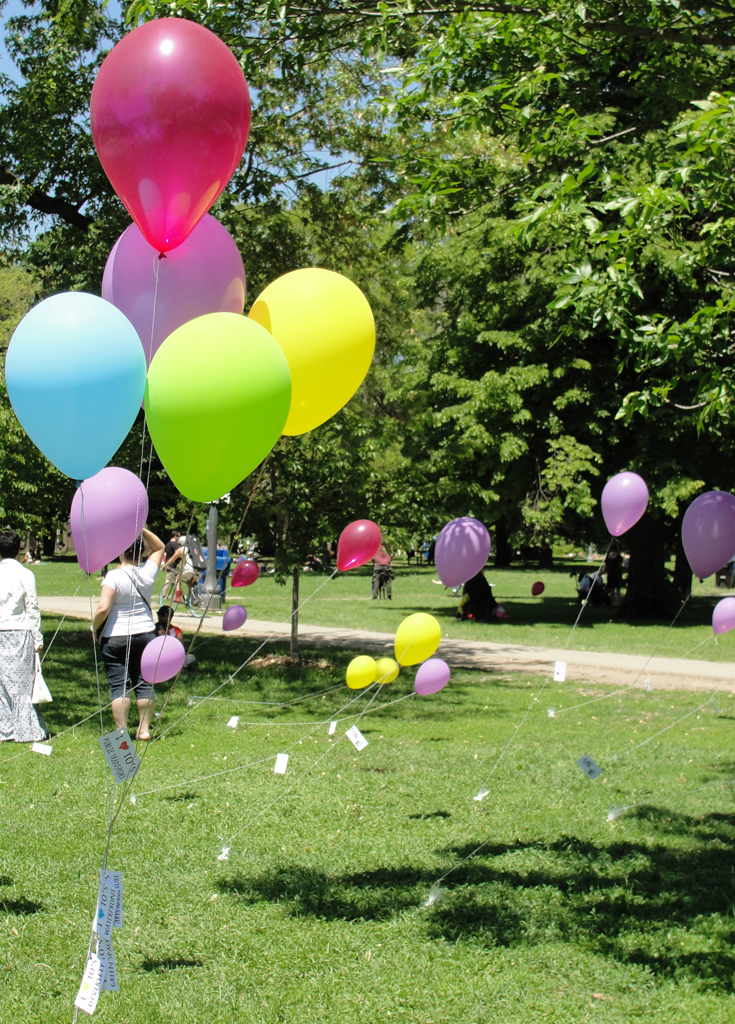 This intervention started off with a forest of 250 colourful balloons each tagged with something you might love in Toronto (e.g. arts and culture, waterfront, diversity, etc). The goal was to encourage people to interact with and walk through the forest choosing and taking with them the balloon that best corresponded with what they love most about the city. The thinking was that at the end of the intervention any balloons that were left would signify the things that we least love about the city and that most need improvement. However, the intervention proved to be so popular that at the end of it, there were no balloons left! But since one of the tags on many of the balloons was “I love TO’s public transportation”, I’m thinking that maybe it was the fun of the balloons themselves and the smiles that it brought to those who picked one up that proved to be the greater takeaway in this intervention rather than the specific tags being chosen. But it was still a great concept! 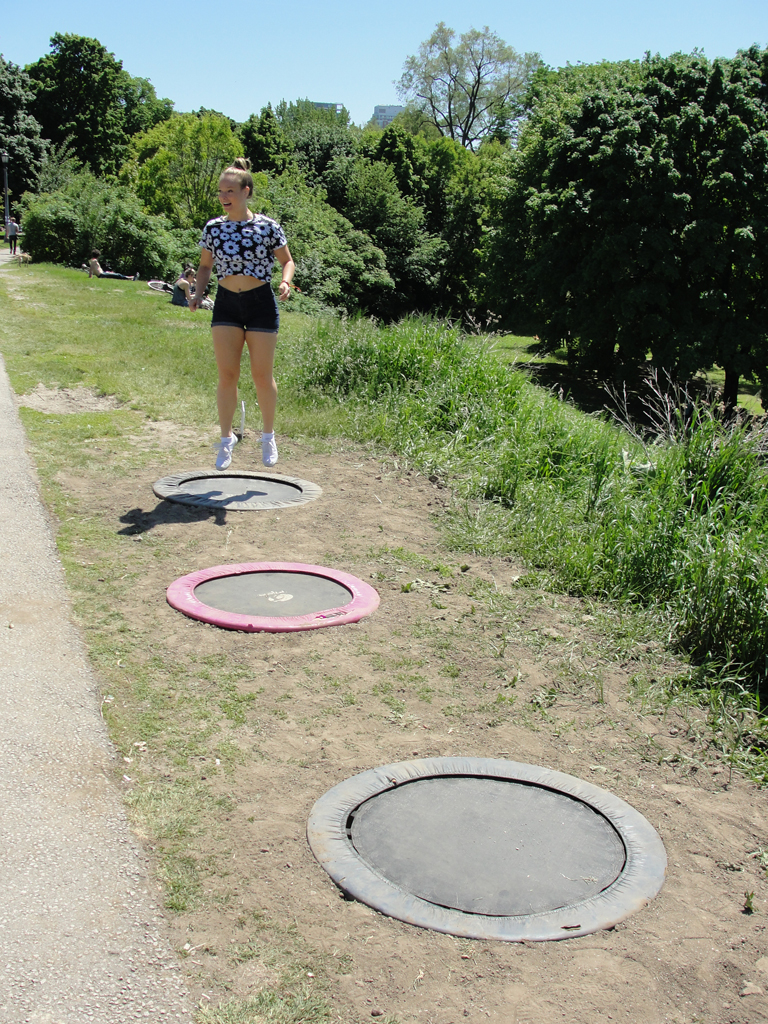 The goal of this intervention was simply to inject a little playfulness into our surroundings. And it totally worked! With the trampolines buried in the dirt pathway, they provided a fun, unexpected surprise and sense of discovery. As soon as people noticed them and realized what they were, they totally felt compelled to try them out (including me and my friends)! 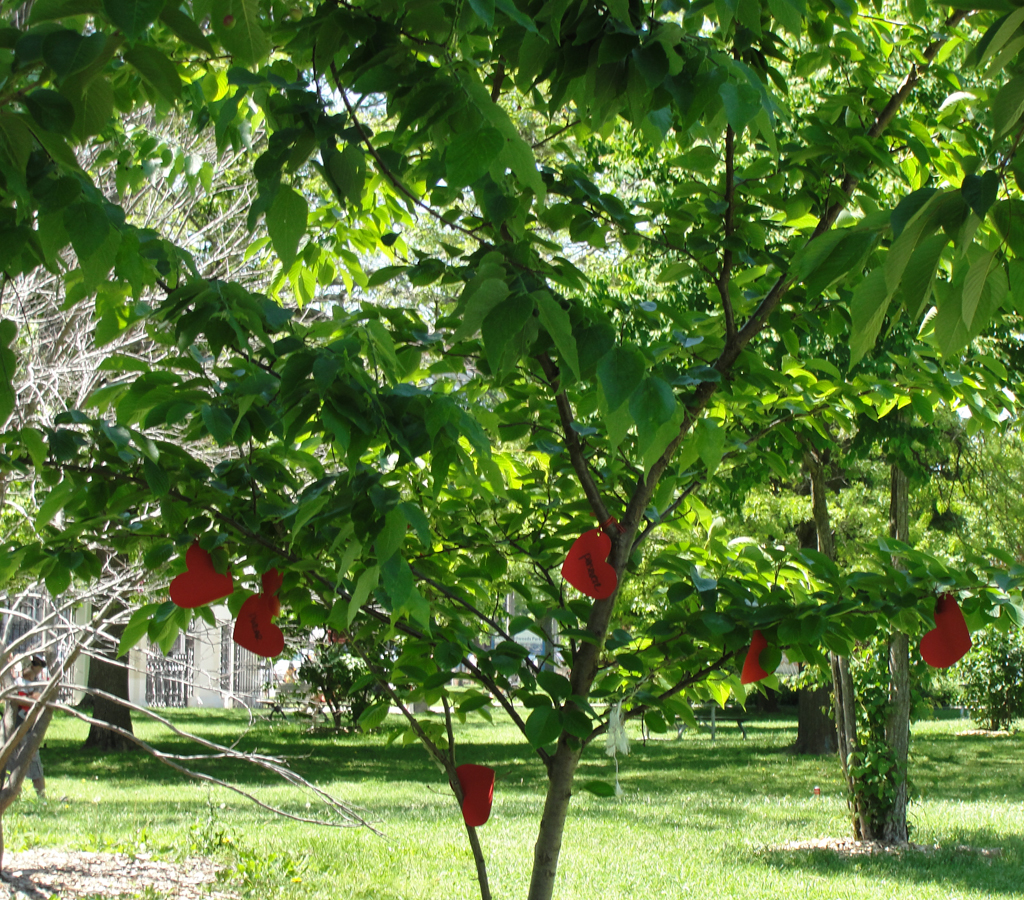 I have no idea if these paper hearts decorating some of the trees in Trinity Bellwoods Park were part of 100 in 1 Day or not (I couldn’t find an intervention that seemed to correspond to them), but I loved them! They were like little fruits of wisdom waiting to be harvested! 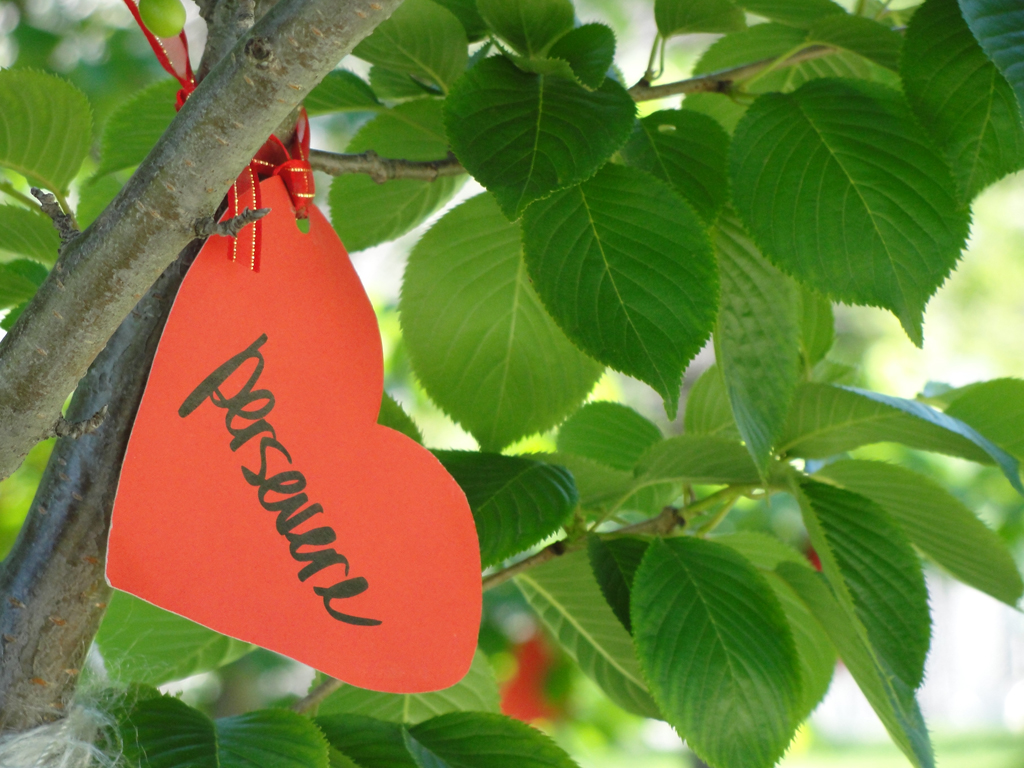 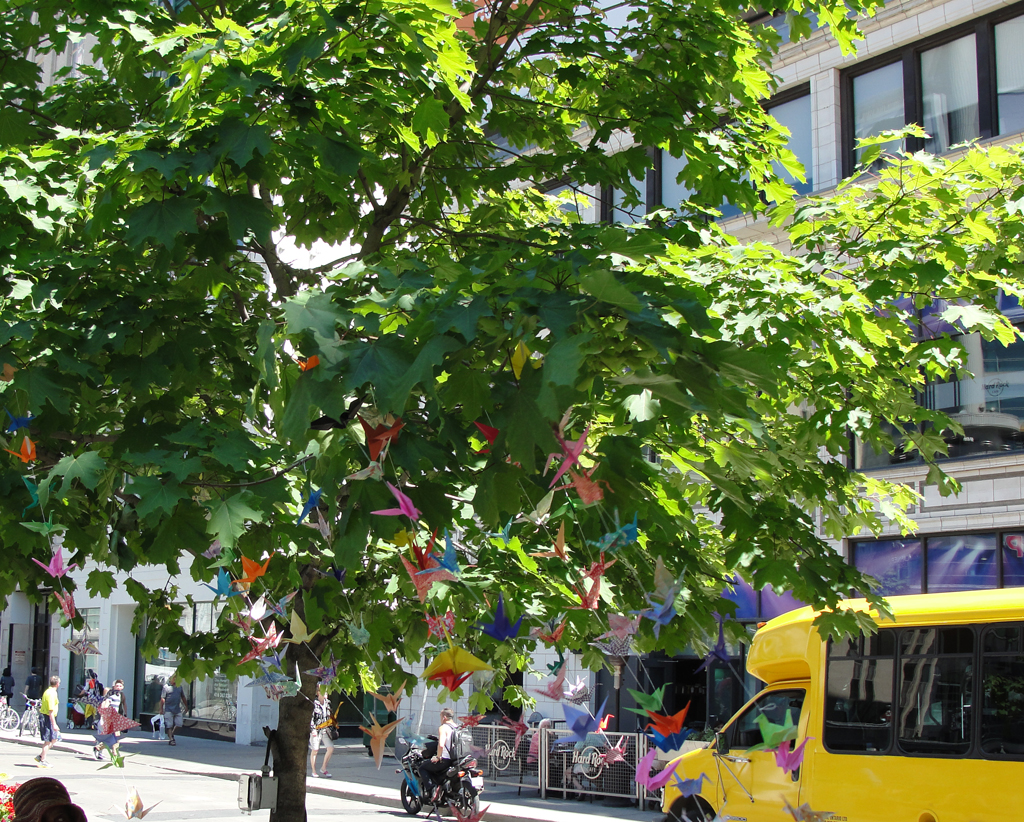 1000 Cranes for Change in Dundas Square

Japanese legend has it that anyone who folds 1000 Origami cranes is granted a wish. So this intervention was to have the residents of Toronto fold 1000 cranes while thinking about what they most hope to see change or be introduced in the city to make it an even better place to live. In the meantime, while we wait for the wish(es) to be granted, the cranes provide a fun, colourful addition to some of the trees in Dundas Square! 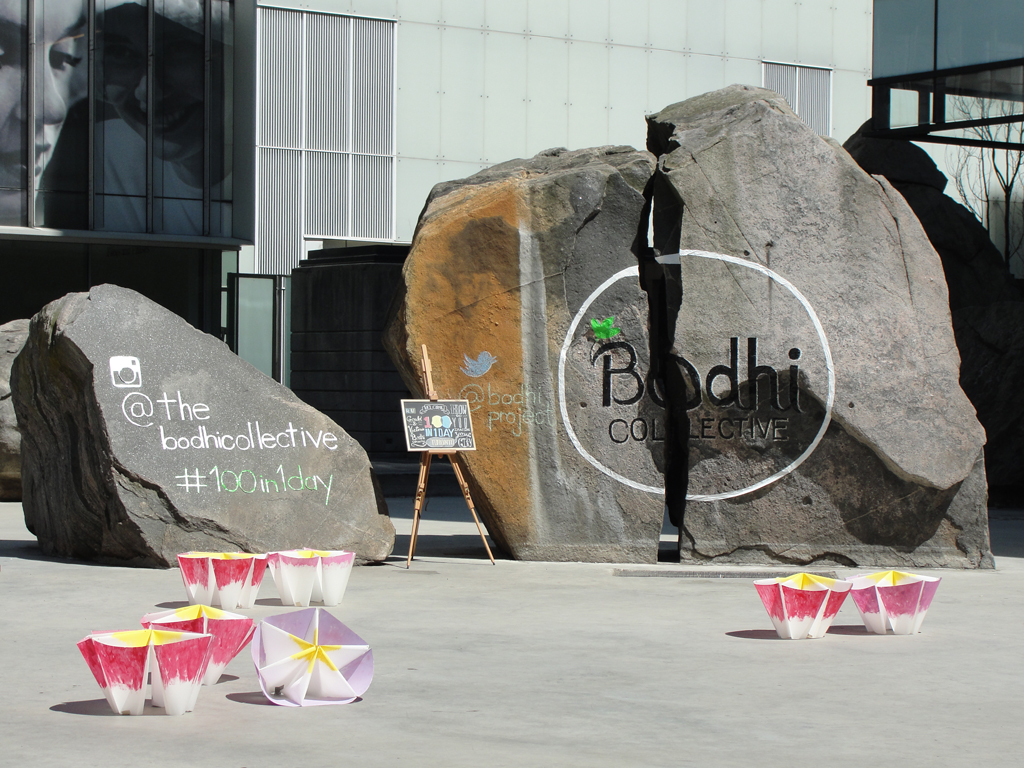 The wishing well was an intervention led by The Bodhi Collective, a student-led creative firm at Ryerson University. Their goal was to transform Lake Devo into a haven for hope, ambition and change through their colourful Wishing Well installation and frame, which showcased the wishes that Toronto residents made throughout the day of what they would most like to see happen in Toronto to make it a better place. 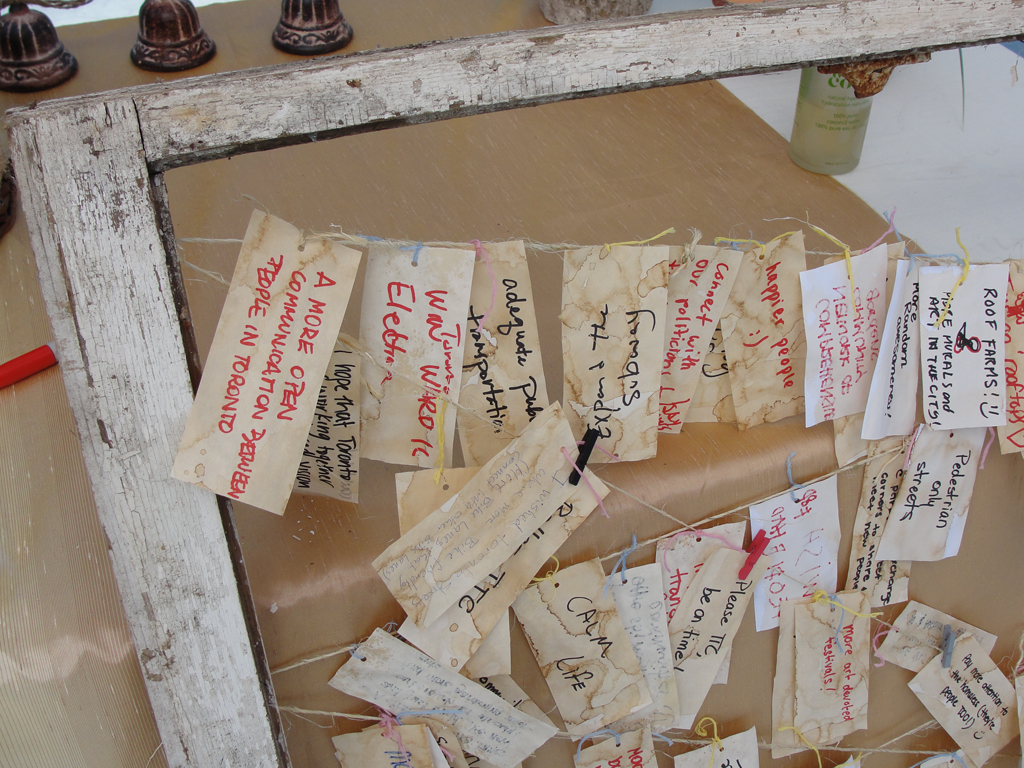 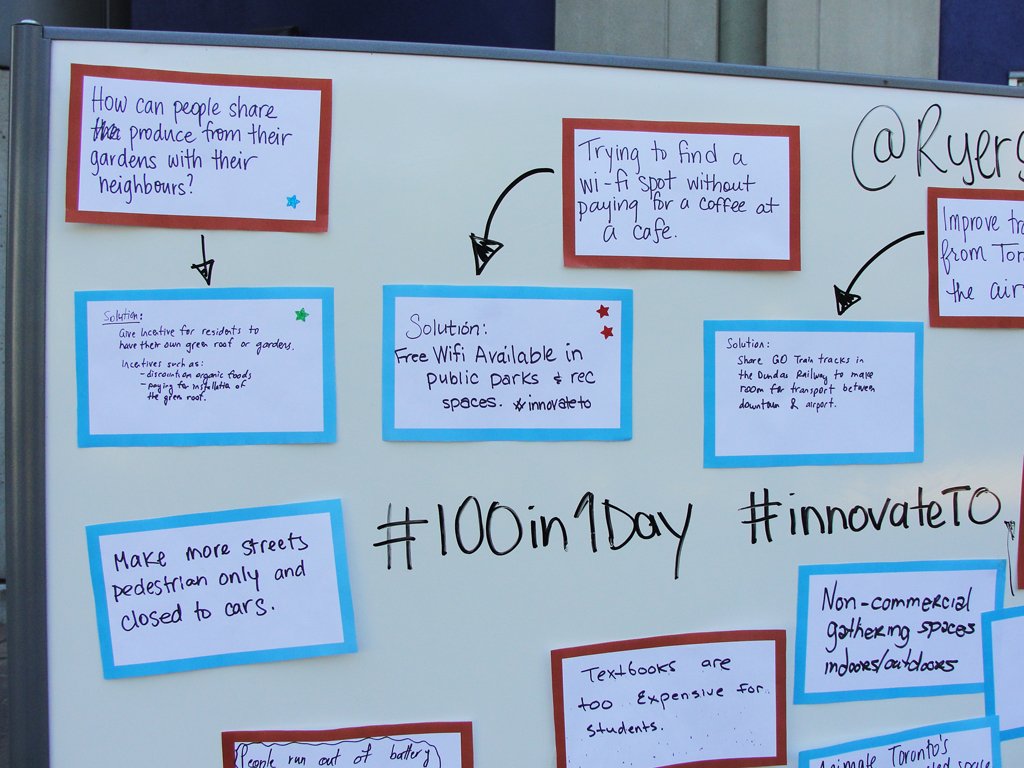 The hope for the Digital Media Zone intervention was that Toronto residents would connect through #innovateTO to share ideas around some of our most challenging problems and what the solutions might be for solving them. The picture above illustrates some of the problems tweeted about over the course of the intervention, along with some of the corresponding solutions. 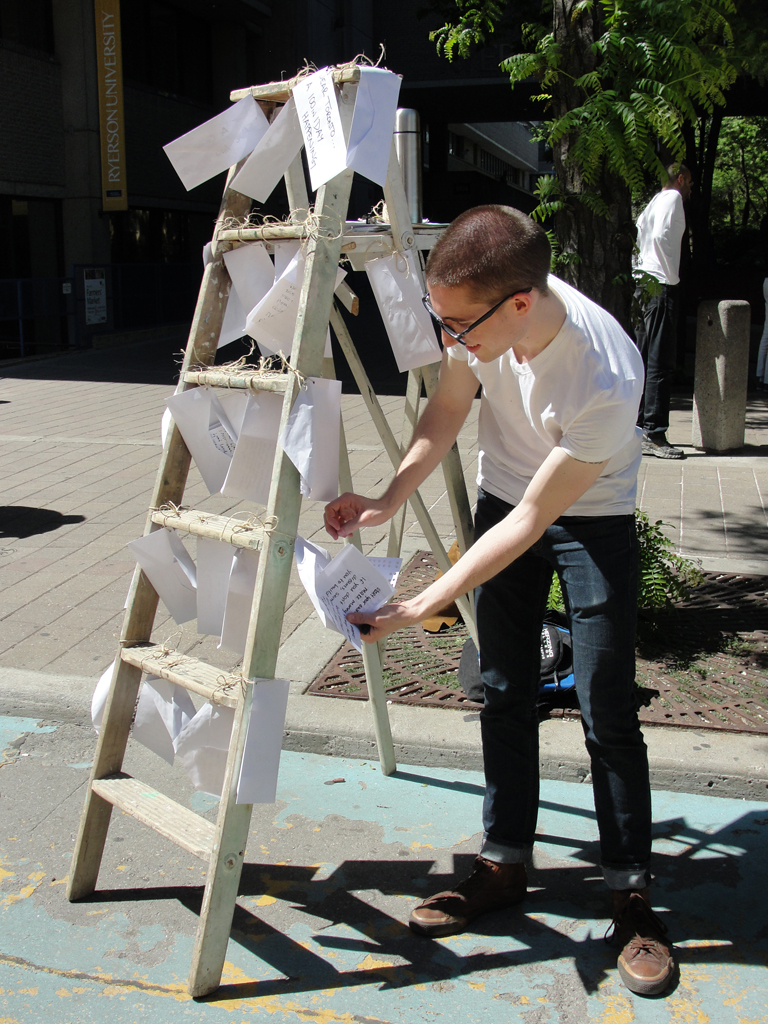 Created by Career Skills Incubator (CSCI), this intervention hoped to harness the wisdom of the larger Toronto community to provide guidance and answers to the most pressing career and life questions posed by CSCI followers. The questions were submitted anonymously via online survey before the festival and put in envelopes on a giant career ladder to which intervention participants left answers in the corresponding envelope. Check back later to CSCI’s blog on their website to find out where you can see all of the questions that were asked and the responses collected. In the meantime, here’s a sample of one of the questions that was posed: 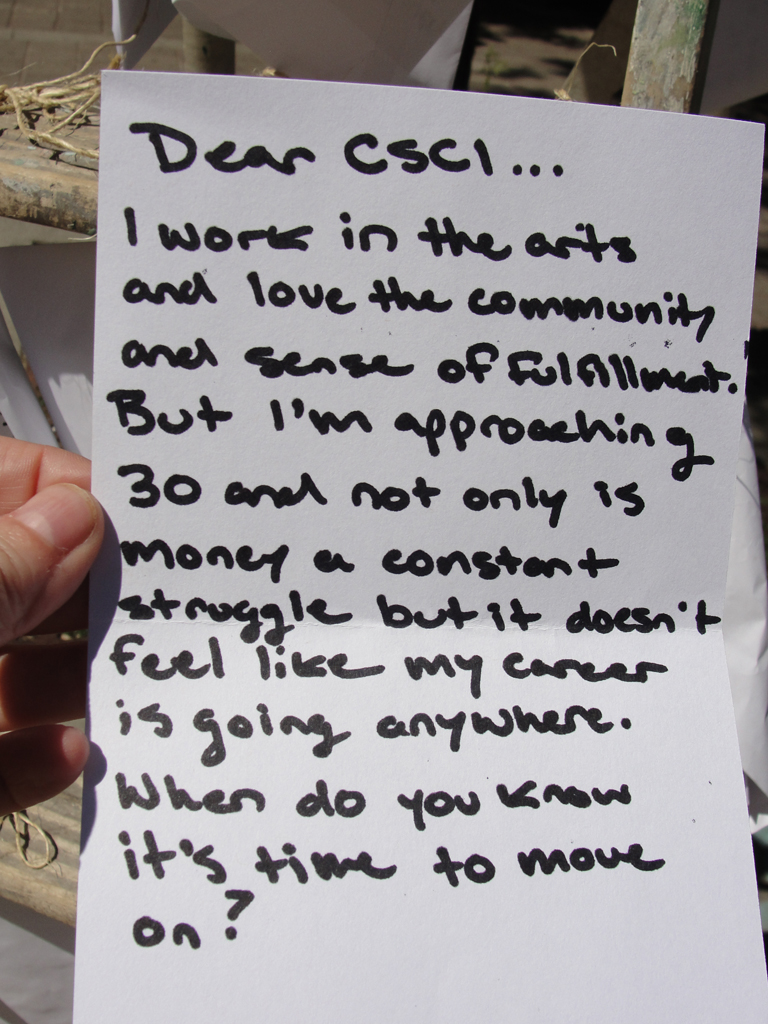 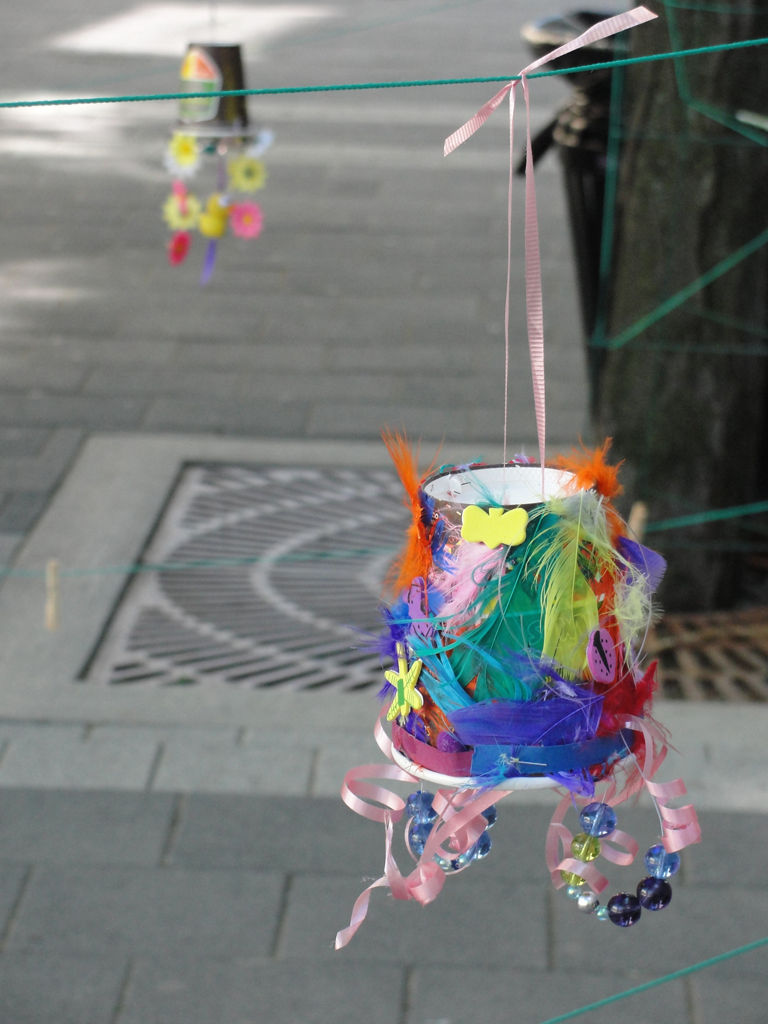 Mobile Magic was an interactive intervention for the young and young-at-heart with a goal of building community through art and play. Participants created mobiles using recyclable and assorted materials which were subsequently strung together in a larger public installation for passersby to enjoy. 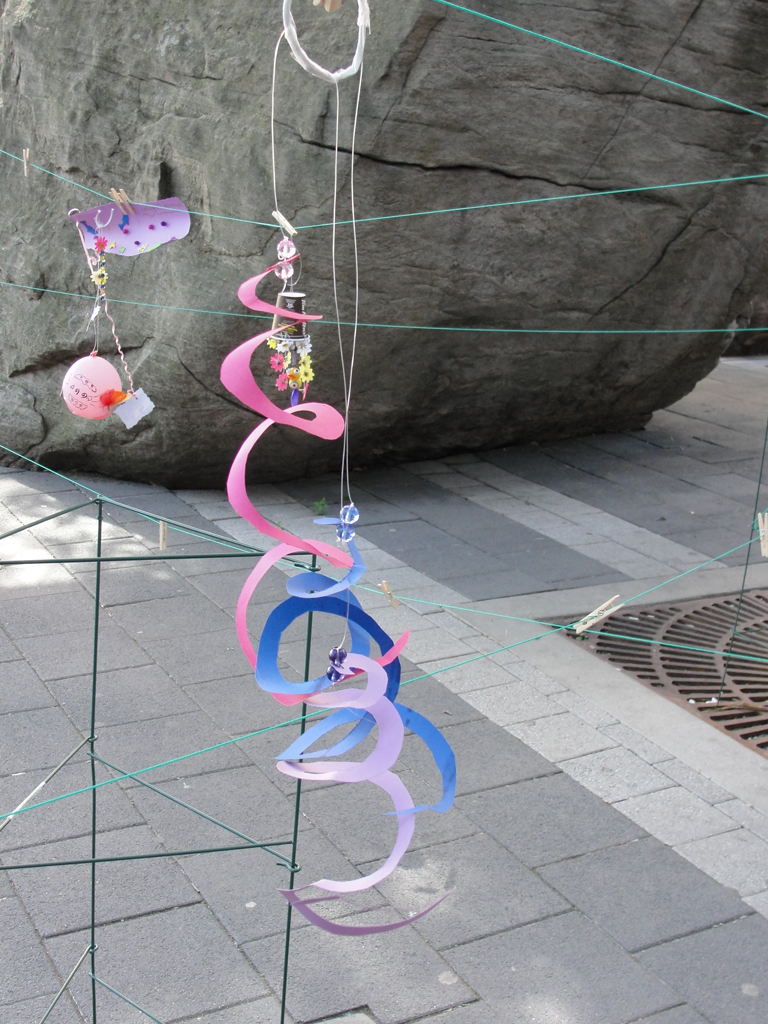 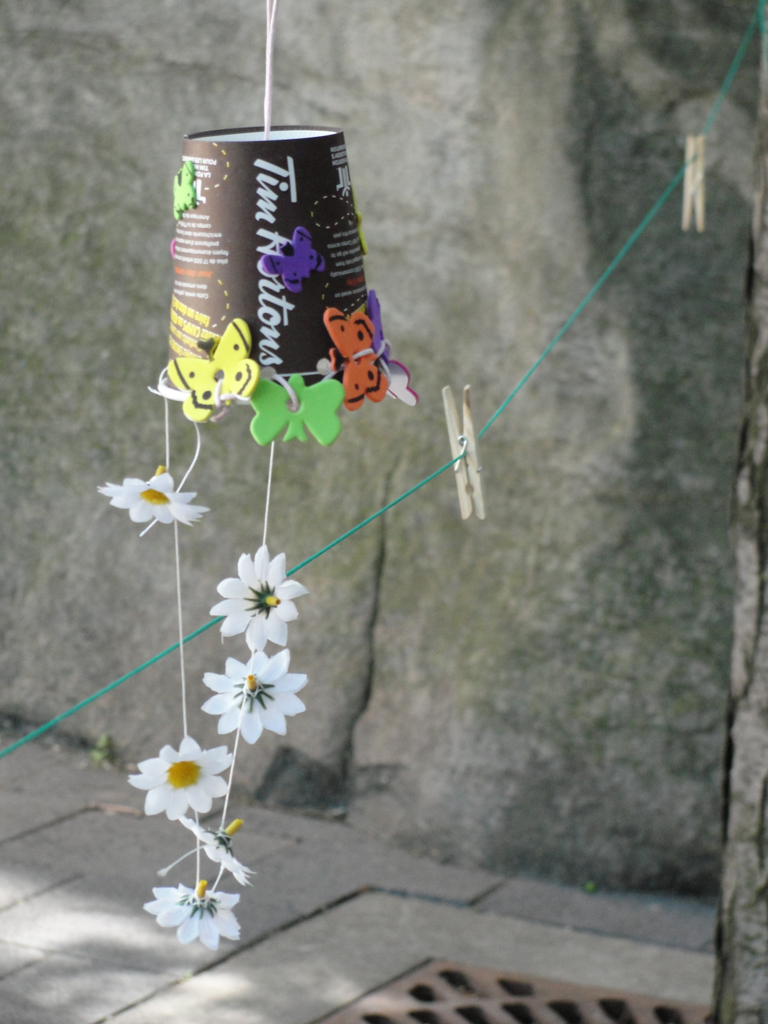